Sri Lanka Cricket Team Removed Sharp Objects a While Ago 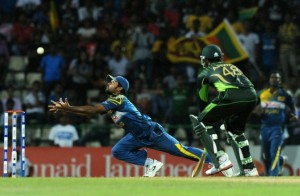 The Sri Lanka Cricket Team said that for a considerable while already it has been adhering to order banning sharp objects at matches issued by the Interim Committee to the public last evening. The team’s media manager said “If you have watched our performances over the last few games and noticed the number of dropped catches and misfields, you will have realised that we are not sharp at all. This was in deliberate preparation for the Board’s new rule”

“We also welcome the news that all distractions including loud noises and flares will also be banned from the ground as we are not used to playing under these conditions, which has affected our performances”

The police have so far arrested a number of people in relation to the violence but after intervention from the Sri Lanka’s fielding coach, they were let go to reach the boundary. Meanwhile Lasith Malinga has been not been letting anything fall off his plate.

2015-07-22
Share
Previous Mahinda Goes on the Offensive: “I’ll Beat Anyone”
Next Fossilized remains of the original Konde Bandapu Cheena found