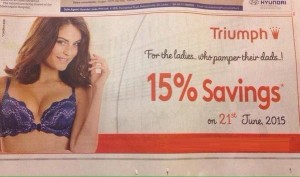 Underwear brand Triumph have been attempting a cover up job after being left exposed when an advert they ran unexpectedly developed in to a major news item last weekend.  However, despite being caught yellow handed with rolled up smoked butter smuggled from one of Colombo’s Top Hotels, the team insisted that they were only trying to tackle obesity through their latest ad campaign.

“Our research indicated that a lot of girls were ashamed of their dad’s man boobs, so we thought a bra would make an ideal Father’s Day gift. Unlike Dadbods, Moobs are no longer in fashion and we wanted to ensure that women would not be embarrassed in public by them and manipples as well, so covering them up was a great idea. We did not expect that customers would be so happy with the 15% discount that they decided to share the advert and make it a viral hit” said the Head of Creative of the brand’s agency while lying face down on the carpet in a haze of smoke listening to Hendrix in the background.