Why Is Only My Father To Blame, When The Biggest Crook Is My Mother’s Husband: Onella 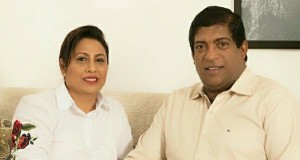 Onella Karunanayake, Daughter of Foreign Affairs Minister Ravi Karunanayke, today said that it is unfair for people to blame her father when the person who possesses the most faulty moral compass in Parliament is actually her mother’s husband.

In an impassioned post on Facebook Ms Karunanayake said, “I don’t normally say anything on social media because I can’t get a good internet connection to the penthouse in which I stayed rent free for several months. The phone masts that carry the signal only reach the 7th floor so we have to rely on the satellite which is much closer but has an inconsistent signal. Anyway, I felt I need to say something so that I because my father is a victim of character assassination.”

“The truth is that instead of going after him, you ire should be directed at my mother’s husband. He is the one person who lacks any form of judgment or ethics. His denial of knowing who and how his rent was paid is inexcusable. All my father was doing is exercising his freedom of speech, whereas my mother’s husband was actually doing the same thing but telling outrageous lies in the process,” she added.

“I know he said that my mother and me don’t know politics and that is true because we are just like him.”

2017-08-04
Share
Previous Estate of Late Andrew Sachs To Sue Ravi For Plagiarism Following Statement Made At Today’s Hearing
Next I Don’t Know My Family’s Rent Arrangements As I Run Foreign Affairs Not Domestic Affairs: Ravi