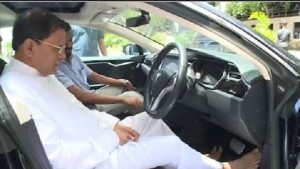 While sitting in the driving seat, President Maithripala Sirisena has been driving backwards more than forwards in the country’s journey towards progression with the most recent manoeuvre involving a reverse gear U turn in order to avoid a head-on collision with bus operators who are once again in the wrong lane.

President Sirisena said, “I didn’t even go to the Department Of Motor Traffic to get my license to run the country. The previous driver built some solid roads to help take the country forward but he also ran over quite a few people in the process and his conductor, Gota, was taking money from people but not giving all the proceeds to the owner. Anyway, the passengers kicked that driver out and said I should take the wheel. However, after a fairly smooth start going forward, I think I’m more comfortable in reverse gear. I also keep changing the destination.”

One passenger said, “When I asked how much for the ticket, the new conductor Ravi Karunanayake said that it will cost Rs 25 to get to my destination, but when he handed over the ticket, it said Rs 80. No wonder people aren’t getting on the bus. The driver also seems to be debilitated and spineless so is reversing more than going forward. Rather than force other drivers to obey the rules he is just giving way.”

2016-12-05
Share
Previous Everyone Relived It’s The Final Month Of A Shit Year; Most People Set To Drink Through December
Next NewsCurry’s Christmas Gift Guide (With Good Cheer From Takas.lk)