Annual Rains Unforeseen And Don’t Know If My Birthday Will Be Same Day As Last 58 Years: Yapa 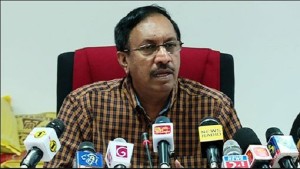 Disaster Management Minister,  Anura Priyadarshana Yapa said that he cannot guarantee that his birthday will fall on the same day that it has for the last 58 years. The Minster said this during a press conference where he also stated that the annual monsoon season was not a given despite, it occurring for over 3000 years.

At the press conference, Mr Yapa said, “We can’t predict anything about the future, expect that I will continue to be a minister in this government despite having a pathetic track record and not attending to my duties during a major disaster that affected the country. Apart from that, we don’t know if tomorrow will be Friday or Saturday. So how can you say we should have known that the annual monsoon would bring rain?”

“I can tell you I will be celebrating my birthday this year but because the date can’t be predicted I can’t prepare for it by spending public money on the birthday party and ordering cake, chairs and balloons, which could have been spent on stockpiling umbrellas and torches for the country instead,” he added.

2017-06-01
Share
Previous Harsha Breaks Record For Most Hi-Fives In One Day After Being Told Ravi No Longer His Boss
Next My Wife Went Into Labour; I Responded Instantly By Coming In Time For Child’s 5th Birthday: Yapa