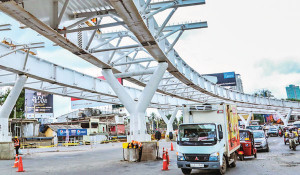 At a press conference, the Deputy Foreign Minister said, “First of all just to say ‘1990’, as I have to include that whenever I say something. The engineers working on the flyover have been coming to work on bicycles over the last few days so they suggested that, just in case, it would be prudent to consider including one when allocating lanes in the flyover. Having arrived in my car to the meeting, I could not see the reason for this.”

“Things are so bad, we might even have to construct a fuel station at the midway point of the flyover so that people who are not politicians can refuel once they have pumped the maximum allocation of Rs 300 from the previous shed when just in case things happen. But people should not worry because 1990 is going to save this country from all its woes, although it may not save the government,” he added.

2017-11-09
Share
Previous We Have Produced A Generation Skilled At Creating Petrol Shortage Related Memes: Ranil
Next Govt To Import Electric Public Buses So People Can Get Knocked Down And Also Electrocuted