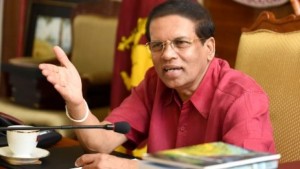 The secretary of the Bus Drivers association and defender of road deaths in Sri Lanka said that he has instructed bus drivers to address their Christmas letters to President Maithripala Sirisena instead of Santa Claus this year considering that the former has already provided the gift of relief from a proposed fine of Rs 25,000 which was aimed at reducing deaths on public roads.

In a statement, the secretary said “Santa wants to know if we have been naughty or nice before deciding whether to give us gifts, but the President knows that we’ve been naughty and despite that is willing to hand out presents. So it’s a no-brainer that we should write our Christmas letters to him instead. Also, it will be cheaper to post and we know the exact address.”

“Some of the popular gifts that our drivers have requested include vehicle and pedestrian free roads, a device that lets conductors push people out of the bus without having to slow down, a maximum fine of Rs 125 and higher speed limits especially along congested roads,” he added.

President Sirisena said, “This is a major achievement for Yahapaalanaya – when I am considered more generous that Santa to our esteemed group of bus drivers. Like them together we will take the country backwards.”