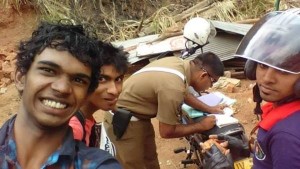 Sri Lankan police announced that they have introduced a new device, called a Polfie Stick, to help counter the new trend amongst young motorists in the country who are taking photos of them getting tickets (a.k.a  Polfies).

At the launch event, a spokesman for the Department of Traffic announced that the Polfie Stick would prove a deterrent to motorists engaged in the Polfie trend as it includes a threefold deterrent: Striking pain to their knee area;  Tagging the incorrect person in the uploaded photo and Adding the photographer’s mother on to Facebook as a friend.

Some cops have resorted to the extreme measure of bribing motorists and turning the tables of one the most established transactions on roadsides. One policeman stated “I am a workaholic and last Saturday told my wife I would be meeting a friend for a long drinking session but actually snuck off to work. A motorist who overtook on a pedestrian crossing tried to take a picture while I was writing up his ticket so I had to not just refuse his bribe, but pay him out of my pocket to avoid the picture being posted so that my wife would think I was getting stone drunk”

The public has been asked not to confuse this trend with the Pol-free whereby politicians receive a free pass from any traffic violations committed.