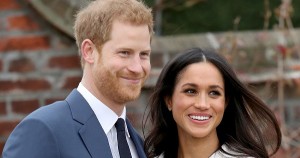 A retired English soldier and an American actress have announced that they will be celebrating their union with a Sri Lankan sized wedding in England during Spring 2018.

The grandmother of the groom, Elizabeth the Second said, “As this will be a Sri Lankan sized wedding I have to act like a Lankan aachchi. I am glad that boy is getting married but couldn’t he have found a nice English girl? Why he has to go and marry a bloody foreigner I don’t know. I hope her parents are paying for the wedding though. Just because she was married previously it doesn’t mean they can pass the bill onto us. Even if they do though, I guess we can just pass the cost on to the public. I guess I’ll have to show how he likes to have his beef grilled. (Not a euphemism).”

The mother of the bride said, “I wanted him to marry a doctor, lawyer, engineer, accountant or a Minister’s son. But I guess royalty is now acceptable and is like marrying someone working in IT nowadays, despite his grandfather being a prone to the odd racist comment. We have a hired a Sri Lankan wedding planner to help manage the shindig as they are the only people who have experience in organising a nuptials on such a large scale. |The main differences are that everything will run to time and there will be less spicy food in the buffet.”

2017-11-28
Share
Previous DMC Warns Public To Stay Away From Areas Prone To Collapse, Like Sri Lanka’s Batting Lineup
Next Department Of Prisons Release Two New Posters As Part Of Campaign To Counter Propaganda