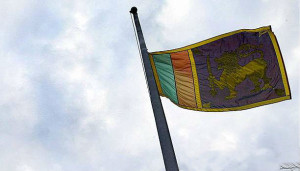 The public has requested that the flag of Sri Lanka be permanently lowered to half-mast following weeks of unrest, an abject government, farcical stories emerging from the cricket setup, mass resignations, deteriorating health system, rising cost of living, an impotent judicial system and Dinesh Chandimal.

One member of the public said, “The current state of the country does not match the usual position of the flag on the mast, so it definitely should be lowered. Considering how bad things are I suggest that we can even go below half-mast to quarter-mast. That is a more appropriate gauge of the mood of the nation. Once this goes through we can begin changing our national anthem to the funeral march.’

President Maithripala Sirisena said, “When I came into power I said that I will adjust certain aspects of society to make it more accessible to the public. So we lowered several things including health standards, morals and ethics of ministers and the pants of staff working at cricket grounds. The time has now arrived for us to also lower the national flag. There is no doubt that all of our hard work over the past two years have helped contribute to this situation and I would like to thank all those who believed us, rather than those believed in us. The latter group must be very depressed now.”