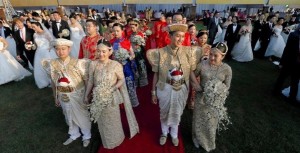 A mass Chinese wedding held on the lawn of the Colombo Municipal Council for 50 brides and grooms was attended by fewer people than a wedding held at the same time in a leading hotel for a single Sri Lankan couple, it was revealed yesterday.

One Lankan aunty who attended the publicity stunt said, “The relative of these brides must be very ill – that is the only explanation as to why there aren’t many people to support these couples on their big day. I mean, they should know that in Sri Lanka it is perfectly acceptable to take out a loan equivalent to the cost of purchasing a new apartment to host a wedding which lasts less than six hours and invite a small island to attend.”

“Do they not want to show that they had a bigger wedding than their cousins? Or invite that Aunty who they hate just so they can rub in that they can show they had a lobster starter? What about that Uncle who they met in passing for forty-five seconds when they were three? These are the people who should be at the top of the list,” the aunt added.