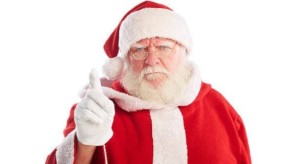 Father Christmas today compounded the on-going standoff between Russia and Sri Lanka by stating that he will not be landing on any rooftops which containing Russian asbestos, the ban of which was deferred by the SL Government due to a tit-for-tat ban on Ceylon Tea.

In a statement, a spokesperson for Mr Claus said, “As part of the move towards sustainability, Santa is no longer landing his sleigh on rooftops that contain asbestos. He is also going to electrocute his reindeers so that they no longer have to run on fossil fuel. But with regards to the asbestos ban, this is something of concern especially in Sri Lanka it has been reported that the ban on sheets has been deferred.”

One parent said, “If the President thinks the GMOA protests were bad, just wait till he sees kids without presents take to the streets. He better addresses this a matter of priority otherwise even the tea won’t be able to relax him.”

2017-12-20
Share
Previous Guest List At Mass Wedding Held For 50 Chinese Couples Less Than Guest List At Single Lankan Wedding
Next ‘I Meant To Tell A Yo Mama So Fat Joke And Got Mixed Up’, Says Namal After Being Accused Of Fat Shaming