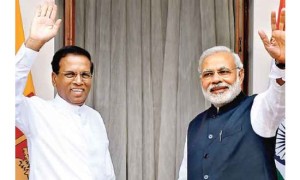 MP Harsha De Silva said that he met with Maithripala Sirisena last evening to allay fears that the President had about losing his job to Indian Prime Minister Modi under the much debated ECTA agreement between Sri Lanka and India.

The Deputy Minister For Economic Development said that following the meeting he was hopeful that the agreement would be pushed through although he had to speak to a few more people in order to give them comfort about the issue surrounding job security. Addressing the media, Dr De Silva said, “This is a positive step in getting closer to reaching an agreement. However, we will be speaking to several others with regards to the concerns they have. I am aware that Ranjan Ramanayake is concerned that Salman Khan will take his role in new movies and that he may end up as a personal trainer while Angelo Mathews has been assured that Virat Kholi will not be captaining both India and Sri Lanka at the T20 World Cup.”

“Of course, some people are likely to be sidelined as a result of this agreement and we think that Ravi may lose his job to an A Level student from Delhi who has understood Economics better than our Finance Minister.” he added.

As a result of the agreement the cuisine of Sri Lankan is likely to be diluted and some people may have a beef with it.