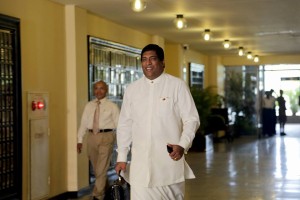 The Minister, who is facing a world record 150th no-confidence motion in Parliament today, said the country is facing a financial crisis and that if taxes were not raised that some politicians may have to pay out of their own pocket to purchase cars and pay for mobile phone bills, things which most of the public on a regular basis. “We cannot have Members of Parliament going from A to B in anything else other than a C-Class. We are adding more flyovers in the capital to accommodate the additional cars being purchased. That way we create more traffic then justify spending for even more roads,” said Mr. Karunanayake.

Asked about the impending No-Faith motion, the Minister said, “Many people have said that no one in the country has any faith in me, but I only ask them to look at my pet dog who obviously has immense faith in me which is why he wags his tail so much when he sees me. And my bank manager. His tail wags even more furiously.”

“Some people have nicknamed me VAT-man on social media but I don’t have any super powers, although during the day I am a billionaire and I sometimes wear a mask in public mainly to protect my friends from the embarrassment of having to associate themselves with me,” he added