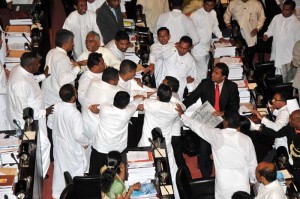 A no-faith motion which was tabled to be brought against Finance Minister Ravi Karunanayake was postponed earlier this afternoon after technical difficulties with the audio system prevented the DJ from playing Cypress Hill’s hit  ‘Insane In the Brain’ during the debate.

Having played Abba’s ‘Money, Money, Money’ and The Beatles ‘Tax Man’ during previous no-faith motions against Mr. Karunanyake, the Joint Opposition had requested DJ Punsiri, who operates the in-house music system to play the Cypress Hill tune during this time’s debate in a bid to put off the Minister from stating his case against the motion and also trying to describe his state to the rest of Parliament. However, a last minute technical hitch meant that the song could not be mixed in causing the speaker of the house, Karu Jayasooriya, to abandon proceedings.

A spokesman for the Joint Opposition said, “We had planned a whole set list for the debate and it took us a while to actually research and pick the aptest tunes. Included in the set list were C & C Music Factory’s ‘Gonna Make You Sweat’ and Queen’s ‘Another One Bites The Dust’. But  our opening track was the Cypress Hill track which sadly the DJ had difficulty playing. We then complained to the Speaker that without the music, Parliament would not get an accurate picture of the Finance Minister.”

“We’re lining up George Michael’s Faith to be played when the debate in reconvened in the future, because he sure needs it,” he added.