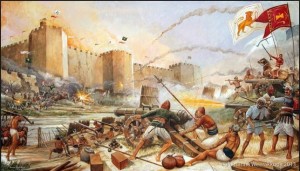 A driver has said that is he has been thinking extremely proud thoughts for the last 4 hours while stuck in traffic about how his great grandfather fought for Independence just because he could be in stuck on the road while some people prepare for an unnecessary celebration parade.

The driver said, “While waiting in traffic I’ve managed to read the whole of War and Peace. At least in war people are generally moving forward. Now that we have peace, we are in one place. In the car next to me in Bambalapitiya a couple made out and they are expecting to have a son by the time they reach Colpetty. And why do they call it rush hour?”

The Ministry of Highway said, “Only certain sections of the population are complaining about this. So far anyone who it a politician has not had anything negative to say about the traffic situation so it is clear that everyone should become a politician or adopt their attitude toward with their motorcade so they can circumvent any blocks and getting security personnel to clear the way.”

2017-02-02
Share
Previous ‘Now That We Have Independence Do We Need To Keep Practising For It?': Everyone Stuck In Traffic
Next Three Wheel Driver Wins Case Without Lawyer After Latter Falls Out On The Way To Court