‘I’m To Ill To Die’ Claims Duminda Silva, As He Plots Checking Into Hospital To Avoid Sentence 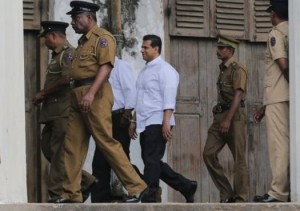 After last afternoon’s ruling during which Duminda Silva and four other personnel were sentenced to death for the assassination of MP Baratha Lakshman the accused has said that he is way too ill to die, in a bid to serve his sentence in a hospital ward.

The former MP was handed the death sentence along with his accomplices after a case that has lasted over a year with a 2 to 1 judgement. Speaking after the delivery of the verdict, Mr. Silva said, “There is a long running precedent when it comes to avoiding serving time behind bars and for crime against which politicians have been convicted, by feigning illness. I have used this before and I intend to employ it once again. My doctor has said that I am at my peak fitness when required to canvass for votes and at my weakest when I am accused of crimes. This is one of the latter moments. It is in my genetic makeup and nothing much I can do about this.”

The Doctor who assessed Mr. Silva has said, “Having conducted a number of tests on my patient, including his ability to serve a term behind bars in a comfortable manner, he is clearly not well enough to die. If his death sentence is served he will surely die and that is no position that someone of his ill health, who is close to death, should have to suffer. Instead, I have prescribed several years in hospital, ideally in Singapore. Once he recuperates he will be fit enough to serve a death sentence.”