India Cricket Board Tells Sri Lanka Cricket ‘He Who Smelt It, Dealt It’ 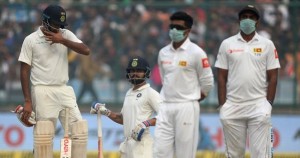 The BCCI has informed SLC that it is the Indian team who should be wearing face masks and accused the Sri Lankans of polluting the air, saying that ‘He who smelt it, dealt it’ after the visitors were seen sporting the masks initially.

A spokesperson for the BCCI said, “We offered the Sri Lankans a large spread of Indian curries at lunch but obviously it didn’t agree with one of the players who then proceeded to pollute the air in the vicinity of the ground. We believe that this is also a conspiracy to tarnish the image of Indian curries in favour of Sri Lankan ones. We know that they have snuck some Brinjal Pickle into the country so that could be to blame. Anyway, as the party to were first to notice the offending smell, we are suspicious that they were indeed involved in the dispatching the post-lunch gas.”

A spokesperson for Sri Lanka Cricket said, “This is a misunderstanding – our aim in wearing these face masks is to protest against sledging because we are bad at dishing it out and also can’t take it. Just as Dimuth Karunaratne was marking his crease, one of the Indians said that he looked a little edgy and the next thing he has edged the first ball of the innings to the keeper. We want to remove sledging from the game and by wearing face masks, we believe we are stating our stance. Also, we advise fans not to walk behind the Lankan team after lunch.”