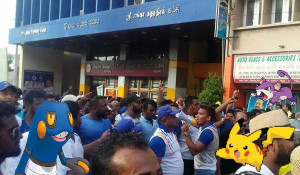 Wimal Weerawanse, Shadow Minister Of Making Threats, today revealed that the recently concluded Paada Yatra was actually one long Pokemon Go hunt that was conducted under the guise of a protest march.

Speaking with a mouthful of microphones stuffed in his face, Mr Weerawanse said, “One of the reasons we lost the last election was that we were unable to connect with the youth of this country. So in a bid to address that we devised a strategy to familiarise ourselves with the Pokemon Go phenomenon which has been sweeping the nation. It was decided that we should go on a hunt to acquire Pokemon but rather that do it as individuals we did this as a group exercise in order to help us bond during the process as well.”

“However, we were unable to reveal the true nature of the procession as we believed that people would have thought we were insane, but that backfired on us as our attempt to mask it as a ‘Jana Satana’ actually was the cause for it to end up being a disaster. If we had revealed that is was a Pokemon Go hunt from the start it would have been  much easier.” he added.

“We can also reveal that the reason we hooted outside the SLFP headquarters was because we were misled into believing that it was a Pokemon Gym, only to find out that there no wasn’t a single Pokemon there to be captured.”

MP Harin Fernando said that by installing a nationwide Wi-Fi network the opposition should be able to go on more Pokemon Go hunts in the future without using up their mobile data allowance. 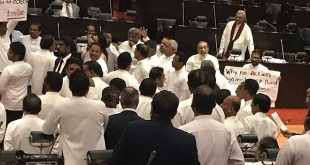