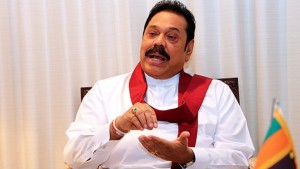 Former President and Leader of opposing every bloody thing, Mahinda Rajapakse today said that 2018 budget presented in Parliament last week was not fit for purpose due to the lack of Oxford commas included within it.

In a press conference held yesterday, Mr Rajapakse said, “The only people who are benefitting from the budget are the printers because they used less ink to print it without the Oxford commas but they surely would have charged for it as grammatically it should be included Without this bit of punctuation the Budget is just a piece of paper used to fry poppadum on. While most of the population think it is a progressive and liberal budget, for the Joint Opposition it harks back to the days before the Oxford comma when the bubonic plague was rampant.”

The leader of the JVP, Anura Kumara Dissanayake said, “Serif fonts are so 2016. This year the catwalks are filled with non-anorexic models and sans serif fonts. The use of a serif font does nothing to alleviate the woes of the poorest people in society who now have been forced to drink cheap beer. This budget must not be implemented because it will result is a country better structured to meet a changing world.”