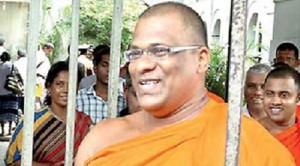 One of Sri Lanka’s leading racists, Gnanasara Thero, was today released on bail for several offences after a previous bail of his was reborn as his current bail this morning.

The Thero said, “For people who do not believe in Karma, here is the evidence. Since the last time I was in court, the bail did a lot of good deeds and acquired a significant amount of merit. It donated a lot of money to those affected by the floods and also adopted several stray animals. It also changed to vegan diet and spent a lot of time with elderly people. As a result it acquired a significant amount of merit. IN addition to this the bail also acquired additional merit from the alleged merit transfer scheme.”

“The bail is also non judgmental or discriminatory, which is evident that it attached itself to a racist like me. Some people asked me why I came out of hiding, and to be honest it was because Wijedasa Rajapakse kept farting in the house. It was unbearable and I had to detach myself from it. Also, he only cooked steaks well-dine, whereas I liked them medium-rare,” he added.