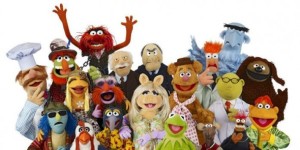 Kermit and his friends have admitted that they enjoy a bit of light entertainment in the evenings by watching the popular comedy ‘The Government Show’ featuring A grade Muppets, for guaranteed laughs.

The popular green amphibian and his on-off swine of a girlfriend said, “After a hard day’s work producing a hit TV show, we need to wind down and generally enjoy a glass of bubbly lake water with a side of flies while watching TV. We recently discovered ‘The Government Show’ where a group of Sri Lankan Muppets try to run the country and it’s hilarious. We have only one Gonzo in our show, but they have Rajitha Senaratne and Rishad Bathudeen. And Ravi Karunanayake’s attempt to be a minister is much funnier than any of Fozzie Bear’s dry jokes.”

“And I am being out Diva’ed by Hirunika,” added Miss Piggy.

We also enjoy the lyrics to the theme song to The Government Show, said Kermit who was singing along to that night’s show –

“It’s time to play the music

It’s time to cut the lights

It’s time to put on make up

It’s time to go on strike

It’s time to get things started

But we won’t get it right

We’ll never get it started on