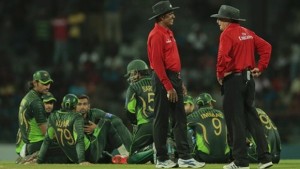 After the crowd marred violence that took place in the last ODI between Sri Lanka and Pakistan caught more attention than the match itself, officials are considering playing the next game in the stands to generate more headline media coverage and boost the sport’s popularity

Media Spokesman for SLC said “So far the only coverage we have been getting for this series has been in the sports pages, but since an encounter in the seating area between two bunches of idiots generated more coverage we are also thinking of playing the match up there as a lot of people started watching it and ignored what was going on the pitch, which actually the Sri Lankan Team didn’t mind”

“The groundsman has been renamed the standsman and is busy preparing the surface. After the last match there are still traces of grass remaining, which the crowd very kindly left behind. His team are also busy rolling in the stands as the cost of cigarettes have gone up. And the drinks break will be replaced with a break from drinking”

In a related story police said their investigation in to Sunday’s match will leave no stone unturned.