President Says That Despite Backlash, He Will Do Everything To Preserve Culture Of Brahapaalanaya 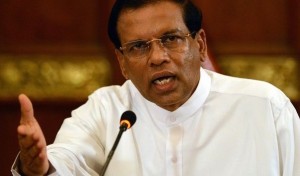 On what is expected to be the last day of the year, President Maithripala Sirisena, who single-handily put Sri Lanka on the front page of several international websites and revived the waning sting-ray tail industry, said that despite people putting forward credible arguments about his hypocrisy, he will continue to ensure that his vote-friendly regime of Brahapaalanaya is enforced across the country.

Speaking to the media, Mr Sirisena said, “We promised democracy and people can now say whatever they want, but that doesn’t mean I have to listen to valid and coherent arguments. I will still do whatever I feel to help deter anyone, apart from Richard Clayderman and Latoya Jackson, visiting this country and corrupting our culture.”

“Such is the priority I have placed on this agenda I sent my son to a recent concert and ensured he had a VIP ticket so that he could monitor people who love fun but are destroying our culture and throwing their brassieres. I think he had a good time on tax payer’s money,” he added

“As a result of my decision to run off my mouth, I have put Sri Lanka on the map. Of course, it is the map of places one should not visit, but nonetheless we are on it” he went on to say

2015-12-31
Share
Previous Enrique Fans To Be Compensated With Follow-Up Show. Kumar To Sing “I Can Be Your Hero”; Mahela To Perform “Bailando”
Next Most New Year Resolutions Set To Last Longer Than Yahapaalanaya Pledges