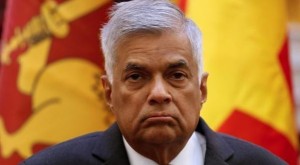 Prime Minister Ranil Wickramasinghe has issued a statement saying that he will only issue a statement with regards to findings of the Bond Scandal once a film version of the report has been released.

A spokesperson for the Prime Minister said, “After discussing the many ways that we can defer of deflect responding to the incriminating findings of the Presidential Inquiry into the Central Bank Bond Scandal, it was agreed that waiting until a theatrical version of the report was filmed and shown would delay getting Mr Wickramasinghe involved for at least another 4 years. He has sighted losing his pair of reading glasses for not being able to refer to the written report.”

“The Prime Minister has also requested that his character is played by Tim Robbins, and Rowan Atkinson to play President Sirisena which he can then use to as a means to mock him and not take the report seriously,” the spokesperson added.