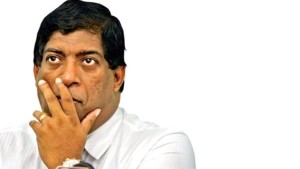 In a statement, the former Finance Minister said, “Having been at a puzzled for much of 2017 about details of my own life, my aim was to try and work hard at avoiding being at a loss this year which is why I made it one of my resolutions. That and not getting caught. The year started off well when I remembered that the 1st of January was a Poya so was not at a loss of alcohol on the day by having pre-purchased several bottles on New Year’s Eve.”