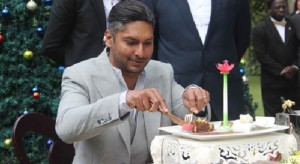 A chef who prepared a cake which has been valued at Rs 3.8 million has revealed that the actual listed price of the cake was Rs 380, and the final valuation included all Govt taxes and also the 348% inflation that occurred between the time the order was placed and served.

Meanwhile, former Sri Lankan Cricketer Kumar Sangakkara who was invited to taste the cake said that not having to pay for it was the icing on the cake. “Instead of enjoying my retirement, I have to keep working to feed my family which is why you see me on every other billboard. Times are so hard that even my wife has to join me in faking interest in some of the products we endorse. So the opportunity to enjoy a piece of cake without having to fork out for it is a huge relief.”

The waiter who prepared the final bill said, “I know the cake is only Rs 380, but I could not understand what Sanga was saying so I added a little bit extra to the bill as I assumed whatever he ordered must have been expensive and I was scared of undervaluing it.”