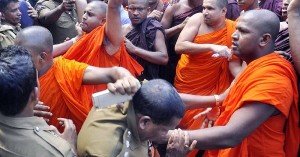 Sales of saffron robes have skyrocketed over the last few days as people start to pick out their Halloween costumes, aiming to go dressed as the scariest personality of the year.

One reveller said, “I was planning to make a big statement at this year’s office Halloween party and had eyed up a Trump mask or a Sri Lankan bus driver’s attire, but decided that wearing a saffron robe would be the best way to terrorise my co-workers, especially those of other religious beliefs.”

“The best part is that I when I arrive at the party I’ll pretend to be really calm, mindful and spread the message of peace. But then as soon as soon as one of our ex-colleagues who is out of a job comes to the party, which should only be for current employees anyway, I will set upon him and threaten him with violence as he begins to serve dessert. I’ll also force the security guard to take that person out, despite me being the one causing all the trouble. Because I work in the Facilities department, the security guard knows he should listen to me. Meanwhile, the CEO will do what he always does and just watch proceedings from a corner and not comment,” the reveller added.