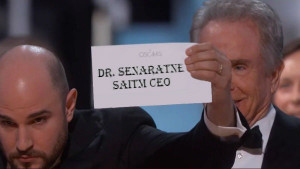 In a further twist to the fiasco surrounding the incorrect awarding of best film to La La Land instead of Moonlight, it was revealed that another award, Best Actor, has also been  mistakenly awarded to Casey Affleck when it should have been presented to SAITM CEO Dr Senaratne for his performance in the sequel to ‘One Shot’ called ‘More Than One Shot But They Were All Fake’.

Sri Lankan accounting firm, Gannakara & Sons have taken responsibility for the error saying, “While Affleck’s performance in Manchester By The Sea was leading the poll, a last minute performance by the SAITM CEO which convinced several members of the public that he was shot at gained a lot of traction. We sent the envelope with the winner’s name but due to a postal strike along Lotus Road it did not get to the Academy Award ceremony in time.”

Dr Senaratne said, “I’m not worried about losing my job at SAITM because I can now go to Hollywood and start my acting career. Although Sri Lankans are vilifying me for my unethical behaviour, Martin Scorcese has said he wants to cast me in his next flick.”

Ranjan Ramanayake said, “Doing a One Shot sequel without Ranjan is like doing a Fast and the Furious without Vin Deisel.”