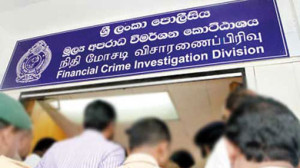 According to reports from highly placed political sources, local crime series FCID is set to end after just one season with the producers disappointed at the lack of arrests made during the 18 month run. (Spoiler alert – zero convictions more money has been found in kid’s piggy banks than the FCID have recovered through the course of their investigations.)

In a statement, one of the producers of the show, M Sirisena, said, “Last January when we aired the first episode we were confident that there would be several convictions during the series and we commissioned the script writers to include this into the storylines. However the actors playing the part of the FCID inspectors have decided to take the series in a different direction after realising that the scriptwriters had not included enough concrete evidence to ensure that arrests led to convictions.”

“As such it now seems we have to end the series after a single run. While not a meant to be thought provoking show, it has been turned from a thriller into a farce. And unlike Game of Thrones despite all the characters written off the press version of events, in when it has played out all the accused are not just living but thriving,” he added.

The FCID series is to change rebrand as a ‘Special Police Force’ so that the producers can claim that is a different series altogether despite rumours that it will in effect be season two with the same disappointing plot holes, characters and no convictions.

2016-06-14
Share
Previous 145 Ministers Defeat Motion Against Ravi While 19,999,855 Sri Lankans Still Have No Faith
Next Maithri Forced To Act Cool After Forgetting To Bring $20 Bill To Inspect Seized Cocaine Haul