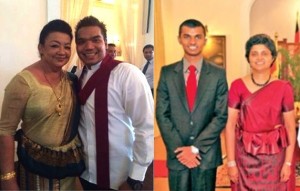 The sons of two leading female figures in the former regime have entered in to an online spat about who is the most corrupt, which has now gone viral over the internet.

The argument got underway when the former Chief Justice’s son pointed out to the former first son that his mother had been summoned saying ‘Yo Mama So Corrupt she got called up by the FCID’. Adding Karma is a Bitch

‘Well Your Mama So Corrupt even my dad couldn’t handle it and had to impeach her’ the Na-Flower responded.

Other smack downs laid between the boys during the spat included

‘Yo Mama So Corrupt, Sepp Blatter was thinking about giving her the FIFA presidency’

‘Yo Mama So Corrupt, she invented the Pyramid Scheme and also had a Golden Key Credit Card’

‘Yo Mama So Corrupt they call her Mrs 10%, because she likes to wear pants 10% wider than her hips’

‘Yo Mama So Corrupt, Wele Suda turned white when hearing her name’

Neither Mamas were contactable at the time of printing this article